What actually caused so many deaths - it was not night time; People could swim; People can cling or run from the waves; - was it so rapid or I have no idea about the force of water - fishermen etc can atleast swim; yet such horriying numbers of dead and missing. Death toll is already 80,000 plus overall - 15,000 in India itself. They were swept and drowned ?

Quantum Physics and Advaita Philosophy propound the very same concepts. The fact that matter, mind and soul are one and the same - the Prakriti and Purusha -the wave-particle duality ... That state of God or Brahman attainable only through intense meditation to reach Nirvikalpa Samadhi, when the individual soul merges with the supreme soul - the soul of all souls.
by shamitbagchi à 12/26/2004 08:57:00 PM 1 comment: 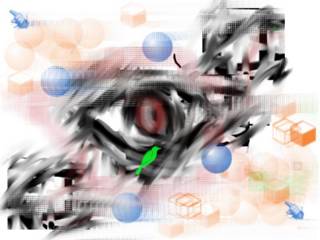 The Software Engineer
Mouse on Gimp, circa 2004.
� Shamit Bagchi

I did this some time back, dabbling with GIMP on Linux.
I gave it the name 'Surreal' first, then changed it to the above name.

Can you guess the meaning of the painting ...

I had heard a lot about her, had thought and knew of her as a great component of the Carnatic form of Indian classical music. A singer said to be beyond comparison. I had not heard too many of her renditions; only had a vague remeberance that I had watched a movie some ten years back in which she had played the lead role and also sung all the songs. I love to hear Indian classical music whenever I can, Bhimsen Joshi, or instrmental like Chaurasia, Zakhir Hussain, Ravi Shankar etc. But it was only after her recent demise that I kept readng glowing tributes to the legendary singer who came across as a humble and brilliant performer. Then the day after her demise or two days later Doordarshan telecasted the movie Meera; in which she plays the role of Meera - an intro is shown where Sarojini Naidu is praising the effort and characterisation of Meera by MS Subbulakshmi. The movie actually portrays the life of Meera, the unparalleled devotee of Krishna. MS plays the role with aplomb and comes across as a gracious, sweet person who has such a lovely timbre in her voice, so full of devotion - a spiritual qulaity that I have heard of or read about again and again; it seems like she is indeed transformed into Meera herself. A great peronality indeed has passed away - who has given music the spiritual magical touch. If I am not mistaken, Suprabhatam and Bhajaa Govindam that you get to hear in every local temple are her wonderful renditions ... Let such people take birth again and again - the age-old traditions and civilizational values - the very roots or the core and the ethos thrives because of such geniuses.
by shamitbagchi à 12/19/2004 11:55:00 AM No comments:

I am still reading One Hundred Years of Solitude � a marvelous book by Gabriel Garcia Marquez; it is a tale of one family as it proliferates, generation after generation. With its myriad characters, each with very similar Spanish names based in an imaginary South American town of Macondo. I got a whiff of some form of writing apart from that of Magic Realism that Marquez is acclaimed for. I would call it the concept of Repeated Negatives � wherein you emphasize and portray the negative behaviours and activities of people and how they become, from good, harmless men and women to direction less, mean, overambitious, egoistic, scheming and morally hollow tyrants. These negative qualities are repeated again and again in great detail and glowing prose, so as to actually in effect cause a definite dislike towards such characters.
Apart from this the novel also shows in very mature storytelling, how people suffer from solitude,or loneliness even though they have or do everything in excess and also have all the powers. Finally they are in a state of disillusionment and discontent; a condition where they are ignored, forgotten or in oblivion and pass out either wasting away or in a fit of rage or some accident. Sometimes what you get in terms of material comforts is not what matters � you may feel handicapped in another field or hollow in terms of what you really want to do. Or is this the result in every case, for every human being.

Going away from the book:
If your outlook towards life is fatalistic you will always get failure and death is finally for everyone � instead live life full of zest and positive outlook with faith and always remain active; is the theme of life.
Only we need to stick to the chosen principles and not forget that the whole thing called life is for the good of people, family and friends and we always need to keep up the quest for knowledge. This is in a nutshell but still the essence. Coming to the question whether to give up everything in life may not be applicable to all.
Recently, I was reading an article in The New Indian Express by Sri Sri Ravishankar(Art of Living foundation) where he tells its not that you should refuse to identify with your identity � and give up the identity. Own your identity but do not crave for that identity � ie ego, name, fame etc. The disowning of identity is what he attributes to the decline in Hindu identity and ideology, thoughts and glory. Hindus tend to assimilate every other religion into it � however they never assert themselves. For this he gives a simple example : A Muslim Communist will very easily admit his religion � but a Hindu Communist will hesitate and try to suppress the fact that he is a Hindu � in turn trying to project himself as a true communist; an upholder of communist values. Unless your identity is clear there is no question of world standing � thats why the nation and national identity is paramount; Vasudhaiv Kutumbakam does not mean the country can be forgotten. National identity and equal human rights are not contradictory. In this way at every level identity plays an important role. Differentiation and identifying the abilities and behaviours are simple ways of deciding promotions etc in corporate level too. Remember performance appraisals.

Email ThisBlogThis!Share to TwitterShare to FacebookShare to Pinterest
Libellés : Books

Motivating factors in a job ...

I had enumerated the following as motivating factors in a job:

Further answering the other questions posed:

What is challenging stuff??
Work that makes you think - has twists and turns - rather than just converting requirements into code. Including the brainstorming sessions in a group and design strategies. You are not just assigned something and thats all ... Not brainlessly and repeatedly doing something again and again - eg: lots of GUIs

What is creative work?
Creative would be something that is innovative in its own way - may be new ways of doing things. Learning/discovering/inventing on the job and through mentors about new techniques, new mechanisms, new software and programming practices and continuously being on the forefront of new technology. Also may be extra curricular activities and other exciting and new initiatives from the management. An IP friendly company will push the employees to constantly innovate and patent. Many other things could come under this.

What is good work ethics?
People do not backstab and involve in 'evil' practices, plagiarism, and without mal intent; politics should be less. Where you are rewarded for new initiatives or ideas (renumeration included). Good mentors and great group working. Good HR policies too ... This makes you more readily work for the company with the right conducive atmosphere.