Convolution: The primary purpose of Convolution in case of a CNNs is to extract features from the input image. Convolution preserves the spatial relationship between pixels by learning image features

In the computation above we slide the orange matrix over the original image (green) by 1 pixel (also called ‘stride’) and for every position, we compute element wise multiplication (between the two matrices) and add the multiplication outputs to get the final value which forms a single element of the output matrix (pink). Note that the 3×3 matrix “sees” only a part of the input image in each stride.

In CNNs terminology, the 3×3 matrix is called a ‘filter‘ or ‘kernel’ or ‘feature detector’ and the matrix formed by sliding the filter over the image and computing the dot product is called the ‘Convolved Feature’ or ‘Activation Map’ or the ‘Feature Map‘. It is important to note that filters acts as feature detectors from the original input image. 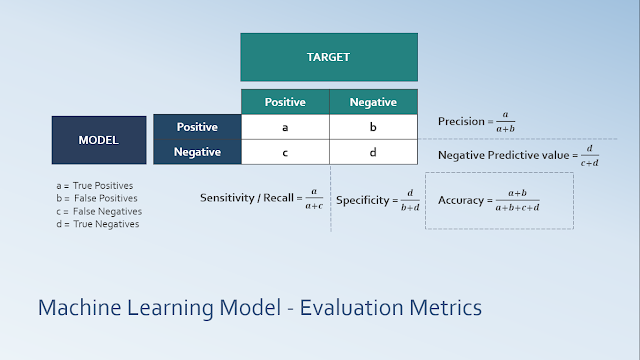 For example, when you consider the results of a particular test in two populations, one population with a disease, the other population without the disease, you will rarely observe a perfect separation between the two groups. Indeed, the distribution of the test results will overlap, as shown in the following figure. In a Receiver Operating Characteristic (ROC) curve the true positive rate (Sensitivity) is plotted in function of the false positive rate (100-Specificity) for different cut-off points. Each point on the ROC curve represents a sensitivity/specificity pair corresponding to a particular decision threshold. A test with perfect discrimination (no overlap in the two distributions) has a ROC curve that passes through the upper left corner (100% sensitivity, 100% specificity). Therefore the closer the ROC curve is to the upper left corner, the higher the overall accuracy of the test - see next diagram. The most important metric are the following:

The app runs on: https://[YOUR_PROJECT_ID].appspot.com/

webapp2 is compatible with the WSGI standard for Python web applications. You don't have to use webapp2 to write Python applications for App Engine. Other web application frameworks, such as Django, work with App Engine, and App Engine supports any Python code that uses the CGI standard. The webapp2 project, by Rodrigo Moraes, started as a fork of the App Engine webapp framework, which was used by the Python 2.5 runtime. webapp2 includes a number of features that make developing web applications easier, such as improved support for URI routing, session management and localization. The Python 2.7 runtime uses webapp2, and the project is maintained externally to App Engine. It is supported, but not maintained, by Google.
For more information about webapp2, see the official documentation.


Apart from the Quickstart here:
https://cloud.google.com/natural-language/docs/

I used this code:
https://raw.githubusercontent.com/GoogleCloudPlatform/python-docs-samples/master/language/cloud-client/v1/quickstart.py

I had to do a few additional steps including:

Then I had to disable unwanted warnings based on the details here:
https://urllib3.readthedocs.io/en/latest/advanced-usage.html#ssl-warnings