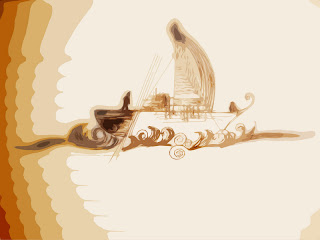 At the Bengaluru Habba venue Karnataka Chitrakala Parishat (KCP), Bangalore, India the Crafts Mela (Fair) and the India Art Trail were fascinating - I had been there today! As soon as you enter there are 3 large light coloured wooden deities made of Sandalwood (I guess - not sure), quite captivating and all around stalls selling arts and crafts. This fair is being conducted by Kala Madhyam - an organization, as it claims, to be dedicated to supporting and empowering traditional (folk and tribal) Indian artists and artisans. More at http://www.kalamadhyam.org/

At the mela, first I went on to meet Deepak, a businessman who is working with artisans who do Kerala Temple art. Being in the interiors these artists are on the verge of giving up the art. He is running an initiative to bring the artisans to do custom artwork on corporate areas etc. Another stall was also on Traditional Mural Art from Kerala (Bhavm from Wayanad, Kerala - http://www.bhavmmuralarts.blogpot.com/) Next I saw some work of Kaathaa stitch etc from Shantiniketan - some of it strangely similar to Warli art of Maharashtra.

Then I went on to a stall displaying Tanjore artwork (Mrs Vasanthi Gopalan - TANJORE PAINTING CRAFT - http://www.tanjorepaintingcraft.com/) very different from the svelte and slim figures in Rajasthani or Moghul art - most figures in this are plump and well endowed images of Krishna and other motifs. A jewel laden piece of Tirupathi was worth 3 Lakhs! Another one was that of the several dieties on a Kamadhenu  worth 1 Lakh. Costly stuff!! But very rich work.

Next I viewed the painstakingly done works of a Gond tribal artist - called the Gond Bhitti Chitrakala (Subhash and Durgabai Vyom - husband and wife it seems, Subhash was working on a piece as he spoke to me). Strangely the black and wite works are costlier than the colour ones which must be because of the fine artwork and greater detail in the B&W ones.

Next were the gorgeous miniatures from Rajasthan - as the owner (Kailash Chandra Kumawat of Hemant Art, Jaipur - http://www.indianparamparikart.com/) explained on how the brushes are pointed and work is done on old British era paper, the queens and women on the artwork are curvaceous, svelte figurines and the eyes are the most prominent. Vivid colours and some very colourful artwork there too - Amboj style.

From this I went to the artwork of Orissa on palm leaves or some leaves of very fine quality - the artist does art on houses and walls too (don't remember his details), and then Warli art and Madhubani. The Madhubani stall (Mithila Vastram from Darbhanga, Bihar) had a plethora of Madhubani work - the owner has also written a trilogy of books to capture the styles and techniques for training, and they have also established a school to teach this form of painting using natural dyes.

Next I came on to the Phad Chitrakari done using stone colours and pigments on canvas paper that does not tear. Also the stone colours are the same ones used on Ajanta and Ellora caves (as explained by an articulate Nandakishore and Prakash Joshi from Bhilwara - http://www.phadchitrakari.com/)

Next was a stall set up by Anwar Chitrakar (apparently he has won a National Award) who does Kalighat paintings, another unique art style from West Bengal - perhaps adopted by Jamini Roy. He talks of how his works mainly get sold in festivals and fairs such as this one conducted by Kala Madhyam and among customers in Kolkata.

Later on I spoke to Mariam Thomas, Program Coordinator for Kala Madhyam and also handling the Craft Mela event at Bengaluru Habba. She says the networks were created early on (this is the 4th or 5th edition of the Crafts fair by Kala Madhyam) with representatives in different cities, now it is well established. Although very few employees exist in her company most others work on a commission based system.

I also saw the paintings kept as part of the KCP gallery, some from everyday life are a great interplay of colours, shadows, mysterious motifs and some vast landscsapes or panoramic views of forts etc.

As part of the Indian Art Trail I went on to see the amazing Masters of Contemporary Art exhibition at KCP curated by Essmath Khaleeli of Apparao Galleries (located at "The Collection" UB City - http://www.apparaogalleries.com/). The works are just too cerebral and visually stunning. Works by Anjolie Ela Menon, Ganesh Pyne, Jaya Ganguly, Sakti Burman, Arpana Caur, Jogen Chowdhury, Laxma Goud, Surendran Nair among the many others were some of the most outstanding. From the bizarre to the erotic imagery to the minimalist, from rich and vivid colors to grey, detailed hallucination like imagery - from the stoic and mundane to the traditional and festive, all forms and occurrences have been captured through the imagination of these artists. You have to see it to believe it. One piece "Plot" by Krishnamachari Bose seemed to capture the mood of the whole setting since it captures a few people staring at exhibits in a gallery and the artist looking at the onlookers from a distance - surreal!

There are films on Monet, Picasso, Frieda Kahlo, Salvador Dali and others being screened at the KCP from 14th December, 2009 everyday at 4 PM. Parallely the Great Indian Gallery Trail is going on at all the galleries across Bangalore (till 20th December 2009) covering the 5 mediums of painting, drawing, sculpture, photography and limited editions.

Next I went to the AFFA offices near Sankey Tank and collected the passes and promo stuff... as Dhonuk (http://www.dhonuk.com/) is the online partner for the Bengaluru Habba 2009. Stay tuned for more!

A quote from the Habba booklet on the Indian Art Trail: