(Image Courtesy: http://oscar.go.com/ - From the Oscar Nominees Page)
I may have watched it a bit late - but nonetheless this movie is an epic in every sense of the word.

It is first and foremost such a beautiful movie - and then it's outstanding! It is a sharply political movie too but not in any negative sense. It has a message that reminds us of the havoc and mindless destruction that war causes.

Right from the way it develops - the beautiful forests of Pandora and its creaures and the Na'vi people to the progression with the human WMDs on display!

It highlights the irrationality behind the 'other' people that we so often love to hate/despise - be it racial, religious or liguistic or of any other nature. And rightfully Avatar deserves the Oscars (I am assuming they would have won on 07 March 2010!).

Some people told me it is a pure 3D animation movie and CGI/SFX and all of that without exactly a story - it is not; absolutely not. It is a perfect concoction of thoughful movie making and Cameron as a wise director deserves all the applause!

What we as human are capable of - some of the scenes reminded me of the US attack on Iraq and Vietnam's retaliation against the US - as well as the dialogues: 'we shall fight this terror with terror', 'shock and awe' - all of that! It is such a great combination of story telling, action, special effects and it uses all of the film making's modern wizardry, technical prowess and macho 'Terminator' like bravado to send out exactly the opposite message - no to war.

It's pro-green, pro mother nature and is anti-war. Period.

I was overwhelmed emotionally seeing the movie.

This movie is a lot of money, effort and time extremely well spent.

The premise might have been a bit flimsy (yes it is a film aint it?) of grey metal - Unobtainium or something that humans are behind (sells at $20 M a kilo apparently) - but then on - it is a lot of things well done!

A must watch. Rich, beautiful and with a message very apt for this day and age - timely and hard hitting!

Mother nature's balancing act which is mentioned in the movie seems to be so true.

As a stark reminder, as if 2,30,000 people dying in Haiti quake was not enough - Mother Nature balances further with Chile - 122 already dead in the quake of magnitude 8.8 on the Richter that hit today.

One critic talks of the White Messaiah theory but apart from that angle I found not fault; in a sense a definitive movie of sorts  if not in acting skills, in everything else!

‘The Amul India Story’ by Ruth Heredia is a story of ideals transforming into building up of one of India’s greatest success stories in the dairy sector. It traces the the birth of a small movement in Gujarat the Kaira District Cooperative Milk Producer Union and its evolution into a fantastic new paradigm of development - the story of Amul.
The vision was laid by Sardar Vallabhai Patel with the focus of use of appropriate technology for rural community organization of producer’s cooperative marketing institutions serving the twin purpose of augmenting rural income and developing local industry. His central question for success of a cooperative was “Are the farmers happy?” and if the answer was yes it meant the cooperative was meeting its intended purpose.
After the establishment of the University for farmers with which the story begins we get to see how Tribhuvandas Kishibhai Patel uses cooperation as the key to solving the problems of the milk producers in Kaira for getting a fair deal and so they could improve their living standards. He was the leader who helped lead and organize the co-operative society. A tenacious beginning and an equally tenacious journey although followed.
Better quality of milk and efficient and economical distribution of milk were the starting points of the unsatisfactory milk production. Middle men and milk contractors also exploited the producers in the earlier system and in turn the commissions they took meant the consumers got the milk for higher prices. Also manipulating the collection during seasonal excesses or shortfalls meant further exploitation.
Thus started the cooperative as means of pasteurization and chilling of milk before transportation to the metropolis through a processing plant and the producers selling their milk to the cooperative. And at this stage Tribhuvandas made point of great importance: membership of the milk producers co-op woul be open to all villagers – no religion, caste or community made any difference.
Having great connections in the political system he was able to procure equipment and establish the cooperative faster although not without glitches and opposition from detractors at every step. Later the entry of Verghese Kurien self confident, intelligent, hard working , technically qualified and extremely ambitious changed the whole face of the dairy. One statement sums it all up :
“Even the most volatile men can often be irresistibly drawn to the steady flame of idealism burning in one man”.

This is perhaps why highly educated professionals in engineering and dairying in agricultural and veterinary sciences with the city dwellers sophisticated tastes and habits found themselves and continue to find themselves as being part of a rural renaissance begun by a single countryman of low academic education but high integrity.
Kurien himself admitted that from the initial professional pride in the technology developed the belief that he was an employee of the farmers and must be at their service came to him slowly absorbed from Tribhuvandas.
The team work between them and HM Dalaya the chief dairy technologist also was at the forefront of the success of the dairy. Adverse bureaucratic decisions were offset by the great political influence of the cooperative’s leaders but in a positive manner and discriminately. An outstanding organizer Tribhuvandas was also able to delegate to persons of proven ability as he did with Kurien and Dalaya. The mangement of Amul and all technical and commercial functions he entrusted to Kurien and Dalaya as he himself focused on liaison with milk producers and Congress party members and elected representatives. By virtue of his high-principled and blameless conduct he held great moral influence.
The producers came to form great solidarity with the management as they were taken into confidence on all measures and allowed to see the functioning and express their doubts, reservations and the trust was built mutually. Eventually the ANAND model was the benchmark for cooperatives model with villagers committed to their uplift and agreeing on how to attain the goal. Tribhuvandas was the leader convincing the producers of the power of cooperation and democratic principles to improve their human condition. He held their loyalty and affection. Kurien was the tough minded and innovative manager – a pugnacious champion against threats bureaucratic and foreign. Dalaya was the wizard dairy technologist.
The trio acted as inspiration with Kurien serving the challenge to the staff of Amul. The staff, comprising of young men were given the freedom to develop their area of responsibility and each had a term of direct service to the villagers and were never penalized for their mistakes.
A sense of mission and of the personal commitment to fight vested interests distinguished the employees of the Kaira Coperative. Dedication, integrity, responsibility, pride in work well done and pride of participation in an admirable enterprise, loyalty, a boldly innovative approach to solving problems were some of the hallmarks and characteristics of the AMUL ethos. To eliminate poverty, and simultaneously build a strong, proud and just nation by harnessing the education, commitment and skills of employees was the constant reminder.
The five key characteristics of a professional’s role in management of change annunciated by Kurien include:
As Kurien says addressing the staff, young recruits:
“Serve the farmer and he will enable you to preserve your professionalism, because he respects it and because he values your integrity”
The direct link of a cooperative structure transferred to the producer the largest share of the consumer’s rupee, creating an incentive to improve production. By placing the farmer in command , as the owner of the cooperative it involved him in the process of development and creation of democratic institutions right down to the level of villages by means of the “one member, one vote” principle.
The board of directors is elected from the producers members, training in accounting and information systems is given and they can dismiss qualified and experienced professionals who are responsible for operations management and marketing, if found not to be promoting the co-op’s interests. Being on the board the observant producers develop a remarkable degree of managerial skills and fair amount of familiarity with the basic technology involved.
Election contests are also spirited and the choice of leadership is governed by economic and rational justifications rather than political or communal priorities. These cooperatives also help in warding off the consequences of natural disasters such as droughts and floods.
One notable feature of the system was the speed with which information was communicated between headquarters at Anand and the remotest village and all kinds of information from notices of meetings and impending visits reports of sick animals, shortage of fodder or cash. Vets, trained staff and mobile dispensaries are always available from the headquarters for tending sick cattle.
Small and marginal farmers earn as much as 25 to 30 percent of their income from milk and they have over the years been able to augment this by 50 to 100 %. It has also ben an uplifting experience for the communities once regarded as untouchables; they have become the largest producers of milk. The rural community which was once insignificant experienced a revolutionary change in its collective sense of self-esteem.
Traders who once denied them credit, advanced seed and fertilizers and a bank loaned money to buy cows and buffaloes. As the villagers worked harder and prospered alcoholism also declined.
Normally at the end of each year the cooperative has made some profit and out of the added sum shareholder-producers receive an annual bonus in proportion to the value of the milk they have supplied during the year.
Shareholders also receive a dividend, and the paid staff get an annual bonus. Out of a part of the profits allocations are made to various funds including reserve, education, charity, cattle development etc. Farmers have learnt to be more receptive, use resources effectively and efficiently and be alert of messages from the environment and to modify their decisions accordingly.
From lessons in animal husbandry and scientific practice they are learning to plan their families and take care of their dietary and sanitary habits. Exhibitions and annual competitions encourage growth of milk production – education films and demos are given – including educational seminars.
As Kurien often says:
“We are not here to develop cows, but to develop people”.
This Amul model has given rise to several milk and other cooperatives across Gujrat and the country too. 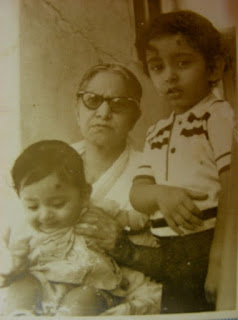 L to R - Me, Granny and Mitul da
The end game - death came.
Took away another name!
Thoughts, memories stay,
The bustle of life eventually replaces the initial dismay!
Time stops, in a trance
Leaping flames eat up the discarded body
As if cleansing or purifying the putrefying
A balm of relief against painful suffering.
Anything that starts, has an end
The road from childhood to a second childhood had many bends!
Now, when the cold numbness meets the searing fire,
A serene calm greets the burning pyre.
by shamitbagchi à 2/03/2010 08:36:00 PM 2 comments: