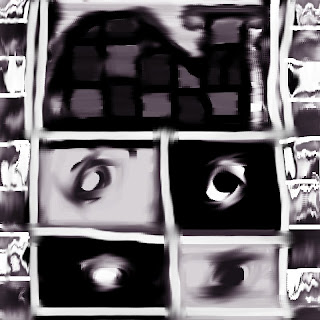 [ Gimp on Ubuntu Feisty Fawn ]
Those hapless pawns, manipulated at will, sacrificed for gains, mere pieces in the hands of the players, the masterminds, successive grandmasters ... Do they possess a mind of their own, or are they mere static, lazy, black and white pieces, pushed around, without any willpower, or the passion of survival? But so is the case with the kings, the queens, the bishops and knights, isn't it?
by shamitbagchi à 9/30/2007 08:45:00 PM No comments:

Email ThisBlogThis!Share to TwitterShare to FacebookShare to Pinterest
Libellés : Artwork

A seamless white, with no ends, no corners; a spotlessly clean, featureless white expanse. This soft white, hit him as a very peaceful sight as soon as he had opened his eyes. His eyes registered his own hands and legs, but nothing apart from himself. As he moved a little forward, on a surface that neither felt cold nor hot, he felt he was in a daze. Then for a moment he closed his eyes and he was thrown into another world - one full of colours, riotous colours, chaotic, noisy with sounds from the familiar world; there was the black spiralling smoke and dumps of filth everywhere, blood, gore and sorrow - all this enveloped him. Without another thought he opened his eyes and was back in the peace of that featureless expanse again.

He enjoyed the clear vision for a while; however after a while a strange nagging feeling started to creep in. What felt quite strange to him was having opened his eyes he was in this neat, white yet monotonously boring world, in a sense almost blind. He felt all over his body wondering whether he was in some kind of a simulation, but no, he had no connections anywhere - neither on his head or his neck. Then a panic overcame him, he wanted to get out from this extremely lonely space, he ran, screaming, waving his hands. The faster he ran or the slower it was always the same white, neat, soft and clear world and no physical exits from it, anywhere in sight, no doors or windows; except that easy way out; closing his eyes. He now, voluntarily closed his eyes, tightly shut. It all appeared back again, people, buildings, cars and scars; everything.

It was indeed an irony, that he had craved for this very neat world, wanting to experience the simplicity of the squeaky clean universe, restricted to just himself – no hassles, no problems. But now it was nightmarish, nothing in sight, whenever he opened his eyes it was this nothingness, the great void – brightly blind. No sounds, peaceful yet suffocating, as if he were deaf; no one to share anything with, nothing to see, touch, or modify. Yet when he closed his eyes he was back in that chaotic world that he had wanted to avoid at all costs. This was driving him crazy. He was imagining what he wanted to get away from and what he wanted to experience was now getting on his nerves.

Does this nothingness sometimes allure you and at the same time scare you too; or is the chaotic, colourful world what you enjoy, since there isn't any escape actually? There is an escape into darkness – inevitable death, but like our protagonist, getting trapped in a white expanse, lacking any human touch, would be unbearable, isnt it? Is that what Nirvana would be like or is the guy just hallucinating? And yet the extremes in this world of ours can be scarier still ...

Which is the wiser world?

THE ART OF GOSSIP

You know what?
An almost inaudible whirr of the desktop fans pervades all around; a new day has just begun at the workplace. On very similar lines another, this time a rather audible whirr of those well-oiled engines of gossip, rumour, trivial talk and the like has also been set into action, determined to change the very landscape of the day. Then at some point the orchestra of gossip begins, along with master strokes on canvas over canvas these artists, some could be great script-writers too if given a chance, set the stage on fire! With absolutely all other faculties put to rust these gossip artists have the keenest faculty for idle talk activated - yak, yak, yak, and more yak!
Maligning anyone or anything with a touch of their imaginative brush, their repertoire consisting of subtle hints, complete rumours and sometimes things indescribable, all coming at no cost. That evil grin, or the rolling of eyes in immense pleasure at being able to kill another person's or group's reputation without the use of any weapon, how spontaneous, almost effortless ... ! A surreptitious comment to seed clouds of doubt can be compared to minimalist design. A volley of 'Do you know...' are like, well non-sense poetry? A detailed analysis of why something may fail, or is no good are like those detailed sculptures 'nakkashi' in famous temples. Gossip can be elevated to nothing less than high art.
Why do people indulge in such gossip artistry or shall we call it sorcery when there are so many other things to dabble in? May be a grudge to overcome or frustration to drain out, a release mechanism. Some use it as a therapy technique, as music for their souls, just as some people have a pastime sketching, on similar lines, you get it don’t you? Some may say it has a positive side to it - building a cohesive group, or team, making members feel good as part of a group. Some become communities of practice, discussing ideas, rejecting those of others. But when you know it is bordering on some malicious intent, you know that you have entered the realm of gossip! It has even become popular on television these days and in those mindlessly glossy serials. And so deft are these gossip artists that they can apply shades of gossip, sometimes light shades, just a touch, sometimes doing permanent damage like tattoos – an art of the dark!
The gossip-artists can be extremely versatile, modulating their 'stories' like classical music; at their will, wish and based on the state they would like to see their victim in. They can themselves act like victims, as if wallowing in a quagmire of emotions, or they can act out as all-knowing maestros, as if positing a theory of why things are the way they are, often with investigative vigour, showing off their mastery of the art of deduction. They are best described as mental criminals or artists if you consider crime as art. Some of these criminals possess the impunity of boisterous, chest thumping hoodlums, some are more like the scheming masterminds, and some like insane sociopaths in an asylum; almost any of their talk is an unqualified rumour, they exist just to gossip!
Talking of artists, I consider myself an artist (mind you, here I mean the actual meaning of that word), as I sometimes do pencil sketches. And you know what ? I met this lady yesterday at the Gallery Sumukha, who paints like a goddess, is like absolutely good looking and all, but she has some dubious history, you know. Why? Let me tell you why, actually I hear ... Oh! Have I been drawn into that art-world of gossip too, unwittingly? My apologies.
DISCLAIMER: If the opinions of the author have hurt 'anyone', then the author is curious to get initiated as an apprentice under that 'anyone' (who would most likely be a master-gossip-artist) in learning up the art of 'you know what' ...