This is a disturbing piece of fiction that I wrote recently.
It is supposed to be in the genre of dark humour.
It has certain bizarre and intended uses of violence.
Do read it and give in your views, but note you have been warned.
Alibi
by shamitbagchi à 4/24/2005 05:12:00 PM 5 comments: 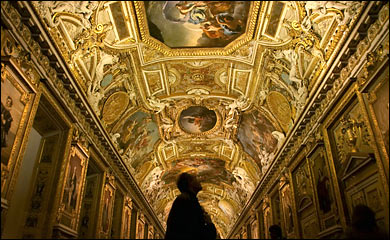 Also a fellow Bangalore blogger and chef and owner of a food joint called 'Shiok' - read his stories of travel and exciting food from Singapore.
by shamitbagchi à 4/10/2005 09:53:00 PM No comments:

Finally felt 'exercise' should get an entry into the dictionary of my life. Started voluntary exercises for the first time ever in my life ;-). Started going to the gym at office, since past one week - approx losing 150 kcal per day (atleast thats what those hulky machines tell me) . . .

Hope to shed some flab as excessive weights can cause hypertension and diabetes etc etc as I am well aware and as the doctor has been repeatedly threatening. It also releases certain good chemicals and I was feeling much better than on all those other days when I used to be sitting all day in front of the Dell Black Box and not doing any form of physical exertion ...
Wish me luck ;-)
by shamitbagchi à 4/10/2005 11:24:00 AM 11 comments:

Was watching the movie 'Pyaasa' by Guru Dutt on Doordarshan today ...
A brilliant movie which focuses on the society's indifference towards a poet played by Guru Dutt himself. He is reduced to penury by certain circumstances after his brothers throw him out of his house.
Its only after he is mistaken to be dead that his poems are published and he becomes a sensation.
He actually has survived and escapes a suicide attempt. Later he is put into an asylum for claiming that he is the poet whose poems have now become famous. Then everyone first avoids him as they will have to share the profits from the published works. Then everyone starts claiming that he is the true poet and they are his friends and relatives so that they can now share the riches.
Though sometimes appearing fatalistic the movie, has songs and sequences replete with theme of the exploitation of women and the rampant poverty in our country. 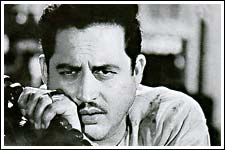 A movie that was released in the same year as Satyajit Ray's 'Pather Panchali'.
Doordarshan is showing the classics on sundays - dont miss the movie 'Kaagaz ke Phool' next sunday at about 12 pm.