'Next' by Michael Crichton

A tale of genetic engineering gone awry, never read a book with a narrative that is so fast paced. It sets your pulse on boosters from the very word 'go'. Human foolishness, greed and malice as always creates a very complex situation with transgenic animals (specifically a parrot and an ape with human properties in the book) becoming victims or perpetrators of violence in a society that is not yet ready for them. Legal battles over who owns the cells which are patented for certain features and the absurd tendency by geneticists to define specific genes to explain any and every human trait from maturity to blond hair, is depicted as becoming the order of the day. Then there are moves for funding and counter-moves by organizations, long chases, legal battles, private investigators and families getting involved in a confusion galore. 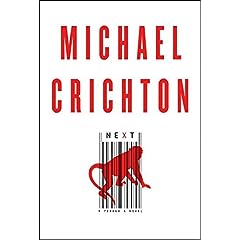 A book that has a well annotated 'List of References' however except for a few good insights and the endnote on the legal consequences and issues related to genetic research; does not match up to Crichton's reputation and is immensely forgettable. Bad choice on my end ! Only redeeming feature is the surprising pace that he can still generate. And just like the pace it is more expletive-laden than ever before.
by shamitbagchi à 2/18/2007 09:40:00 PM

Email ThisBlogThis!Share to TwitterShare to FacebookShare to Pinterest
Libellés : Books